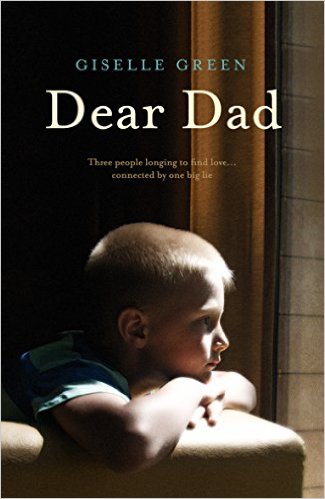 Handsome, 28-year old, Nate Hardman is a frontline reporter with a big problem. Suffering from shell-shock and unable to leave his house, he’s already lost his social life and his girlfriend. Now his career prospects are sinking fast.

9 year-old Adam Boxley who lives alone with his ageing nan, also has big problems. Neglected at home and bullied at school, he’s desperate to reach out to his dad – and that’s when he sends his first letter to Nate. Only Nate’s not who he thinks he is. Will he help? More importantly – can he?

Across town meanwhile, caring but impulsive teacher Jenna Tierney really wants to help Adam – except the feisty redhead has already had enough of teaching. Recently hurt by yet another cheating boyfriend, Jenna’s now set her sights on pursuing a dream career abroad … only she’s about to meet Nate – her dream man who’ll make her re-think everything.

The big question is; can three people desperate to find love, ever find happiness when they’re only connected by one big lie?

This is the first book I’ve read by Giselle Green and I’d like to thank her for the arc in return for an honest review.  Her debut novel Pandora’s Box won the Romantic Novelists’ Association New Writer’s Award in 2008. Her third novel, A Sister’s Gift achieved best-selling number one slot on Amazon kindle in 2012. When I heard Giselle and a fellow book blogger talking about this novel, Dear Dad, I was instantly drawn to the storyline.  They were very enthusiastic about the book and I wanted to learn more and join in with this enthusiasm.  Within the first few chapters of the novel I soon started to appreciate their passion for this book.

I loved this very emotive story following three people struggling to cope with what life has thrown at them.  They are by chance brought together by a special young boy called Adam.  Can the mismatch trio fix each other?

Adam is a 9 year boy who has no mother, no idea of the whereabouts of his father and has been left in the care of his grandmother.  Just recently his gran’s health has been failing and Adam has then turned into the carer.  He has been doing his best for his gran but who is doing their best for Adam?

Nate is a frontline war report, following a very traumatic event with his job he has suffered badly.  He is afraid to leave the safety of his home and when he does venture out he has debilitating panic attacks.

Jenna is a qualified teacher and tattoo artist.  She’s recently fled Sicily following a break-up with her boyfriend.  Jenna has history of not dealing with tough situations and tends to run away from them.  She has returned to Rochester to find work and make a new home.

When Nate receives a handwritten note pushed through his letterbox from Adam saying “Dear Dad … Please Help”.  He is automatically drawn to these two words ‘please help’ and wonders how bad a situation can be for someone to write to an unknown asking for help.  As far as Nate is aware he isn’t a father to any child and assumes Adam has mistaken him but when another note arrives and Nate catches Adam in the act of delivering it he starts to find out more about the young lad.

Jenna in the meantime manages to acquire a supply teacher’s post at Adam’s school.  Sadly, although fortuitous for Adam, she catches him being physically and mentally bullied by some older boys.

We follow the lives of Adam, Nate and Jenna unravelling each other’s situations and ultimately helping Adam.

I was instantly drawn to the heartache and plight Nate was suffering with his PTSD.  I felt for him and my emotions could understand and appreciate the torture he was going through.  It was hard to hear but also enlightening and inspiring, I was willing him on to overcome these barriers.  When Adam’s story was revealed my heart felt broken and I also became quite angry that he had been overlooked by many.  I felt a sort of magical quality emerge within him to seek out help from these two adults who also needed fixing and ultimately helping them would be benefitting himself.

This was a beautiful story, well written dealing with some difficult subjects.  Although the storyline was very raw and emotive at times the underlining current was heartwarming, inspiring and full of hope.  I will certainly be checking out Giselle Green’s back catalogue after this brilliant read.  5/5*

To find out more about Giselle Green and her books please visit the following links: