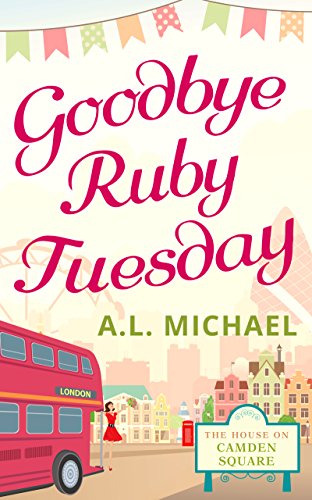 Four friends have become three. But that’s only the beginning.

Ruby, Evie, Mollie and Chelsea were the bad girls at school. But Ruby was the baddest. Evie fought her anger, Mollie fought her mother and Chelsea…well, Chelsea just fought. But Ruby set her sights on a bigger stage. And together, they dreamed of a future where Ruby could sing, Evie could make art, Mollie could bake, Chelsea could dance – and all of them could finally feel at home.

A decade later, the girls are reunited for the funeral of Ruby, who took the world – and the charts – by storm, before fading too soon. And Evie doesn’t know whether to laugh or cry when she learns that Ruby has left them a house on Camden Square – the perfect place for them to fulfil their dreams. But does she dare take the plunge, and risk it all for one last shot at the stars?

This was such an uplifting story, I felt quite emotional and energised at the end.

The author, A.L. Michael, has quite cleverly written around the grief that the three young women were feeling over the untimely death of one of their best friends from school.  Although, the girls had all grown apart in the ten years since they left school the legacy of Ruby Tuesday has brought them all back together.  Initially, just for the funeral but a surprise letter from Ruby has given the girls a seed of hope for the future.

Whilst the girls were at school they were known as trouble makers, their family life and backgrounds hadn’t been easy.  The girls had a lot of fun at school but the best time they had was dreaming about opening up an Arts Centre were all four of them could share their love of art, theatre, dance, cooking, anything creative really.  Over the last ten years life has got in the way of this dream but vivacious Ruby never quite forgot and within her legacy she has left the girls the keys to a dream they’d all buried ten years ago.  However, a time limit beckons.  Can Evie, Mollie and Chelsea pick up from where they left their dream ten years ago and turn this seed of hope into reality?

Turning grief into a new beginning was so heart warming.  There were many moments in the story when  we time hopped back to the girl’s teenage years and their time with Ruby.  Goodbye Ruby Tuesday is book 1 in The House on Camden Square series and we focus mainly on Evie’s story.  When Evie learns of this legacy she is quite instrumental in bringing the dream into reality, she is also the creative genius within the trio.  Evie’s family life is quite troubled and it has made her very angry and many times in her past she has struggled controlling this anger.  An ugly reminder from her past keeps returning and is a threat to the girl’s future.

It was just wonderful to see all the characters developing and growing with this challenge.  Each girl brings a different perspective and strength to the story and I loved the sub-characters of Killian, Esme, Evelyn and Kit.  I can’t wait to hear more from the girls and the development of these sub-characters.

A gorgeous story I couldn’t read quick enough.  Inspiring, uplifting, charming and romantic.  Bring on the next story ‘Nice Day for a White Wedding’, which was released yesterday!  5/5*

To find out more about A.L. Michael and her books please visit the following links:

One thought on “Goodbye Ruby Tuesday by A. L. Michael book review”