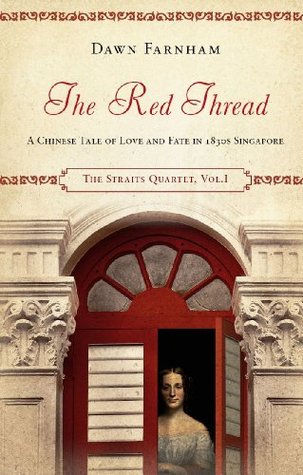 The Red Thread written by Dawn Farnham, publisher Monsoon Books, is available NOW in ebook and paperback format.  The ebook is on special promotion on amazon and is FREE until 25th September 2017.

Set against the backdrop of 1830s Singapore where piracy, crime, triads and tigers are commonplace, this cultural romance follows the struggle of two lovers: Zhen, once the lowliest of Chinese coolies and triad member, later chosen to marry into a Peranakan family of Baba Chinese merchants; and Charlotte, an 18yearold Scots girl and sister of Singapore’s Chief of Police.

I am so pleased to be involved in the blogtour promoting and celebrating The Red Thread, which is volume 1 in The Straits Quartet.

I’m not afraid to say that it took me a little time to get into this story but a novel filled with so much culture, history and diversity cannot be rushed.  From the vivid descriptions of the scenes set on the pages I was transported to a Singapore filled with heady scents and could visualise the changing colourful and sometimes dark landscape.  From the first moment that Zhen laid eyes on Charlotte the intensity of the gaze was bewitching and as a reader you were willing for them to make an acquaintance.  But this wasn’t the time to be foolhardy and life for both the Chinaman and the English woman moved in different directions for a while.  However, the gods of luck were in their court and chances were brought their way to make this acquaintance happen.

Singapore in the 1830’s was becoming multicultural but not all were welcoming the newcomers to their lands.  Political and social unrest was heightened and fear was felt for the lives of many.  The author has woven this love story filled with angst, fear, drama, love and lust at a time were traditions and culture were so evident in many lives.  It was fascinating reading about the varying traditions for life, love and death.  The author was very honest with her writing and we saw life in Singapore in all its glory through the wonderful celebratory events and to times of terrible, horrific acts.  These highs and lows were part of history and come as a package.

The Red Thread was a dangerous, passionate love story that was so touchingly tragic.  In another world and another time there would be no barriers and love would win.

It was dangerous, but for some things it was right to dare danger.

Dawn Farnham is the author of The Straits Quartet