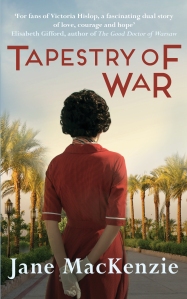 From the deserts of North Africa, to the waters of Scotland, the Second World War touches the lives of two women from two very different worlds. In Alexandria, Fran finds her world turned upside down as Rommel’s forces advance on the idyllic shores of Egypt. The life of luxury and stability that she is used to is taken away as she finds herself having to deal with loss, heartache and political uncertainty. Meanwhile, in the Firth of Clyde, Catriona works day in, day out nursing injured servicemen. Both have their lives challenged, and both dream of a more certain future with the men they come to love. Their heart-warming story takes them through tragedy to a quiet, hopeful triumph. Tapestry of War is a sweeping, evocative novel which brilliantly captures the second world war period of colonial Alexandria and the west of Scotland and will appeal to readers of Dinah Jeffries, Victoria Hislop and Rosie Thomas. 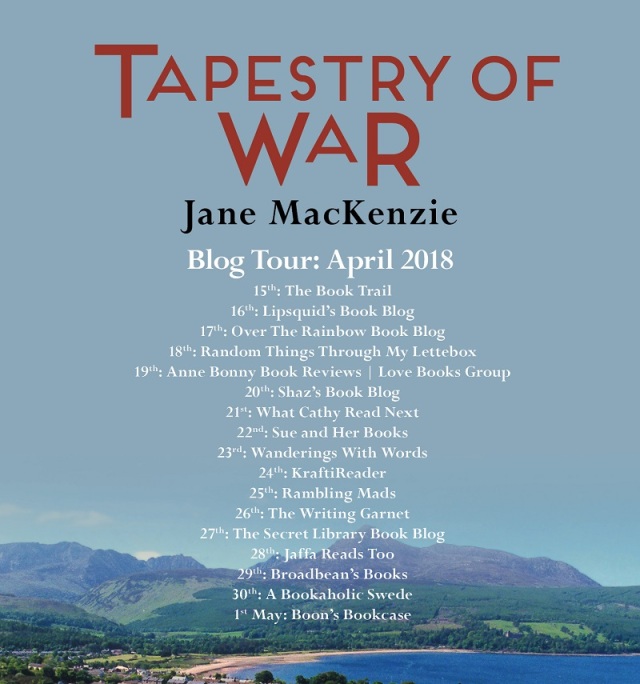 Tapestry of War is a compelling story of people from different continents, cultures, backgrounds brought together by one denominating factor: war.  War wherever it was scarring the landscape is the same all over the world.  It affected people all the same whatever background they came from.  Lives, livelihoods, hearts, minds and bodies were shattered.  Tapestry of War is a story of two women; Fran and Catriona, living thousands of miles apart from very different backgrounds and worlds, are united in friendship, in a shared love and a comradeship for the love of a man that has felt the scars of the war the most.

I haven’t read much about this side of WWII, the conflict in Egypt with Rommel advancing.  The story also takes us to the most northern isles of Scotland with their own part in the WWII efforts with medical facilities for the wounded and also ports for the carriers of troops.

Fran was a journalist for a paper in Alexandria, she was limited to what she could report with a fear of political backlash.  Alexandria was full of foreign troops and Fran soon built up a friendship with many, in particular a shy Scotsman serving in the Navy Jim MacNeill.

Catriona thousands of miles away in Scotland had just finished her nursing qualification and was keen to help with the war wounded. Her father was struggling with grief of his wife and now with his son in the Navy, goodness knows where, he wasn’t keen on his daughter working on the front line.  Catriona felt like she had to make a compromise with her father as she was so keen to be involved with the war help.

With war came great hardship, fear, anguish and many casualties.  Casualties that would alter the lives of many.

Jane MacKenzie took us to the heat of Alexandria, Egypt to the British people that were living in quite a privileged lifestyle before the war and she then took us to a small community in Scotland with very differing lifestyles to the British occupancy in Egypt.  These two communities were very different and the impact of the war on food and livelihoods was felt the keenest in Scotland but the emotional impact was very much the same.

A fascinating, compelling, beautiful and real story, full of hope for a new life, peace and love.