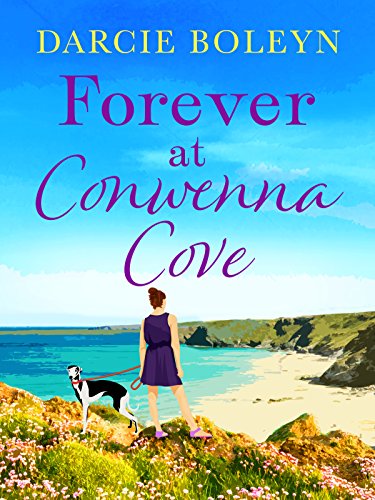 Following heartbreak, Zoe Russell found a haven in Conwenna Cove. As the owner of the village diner and a volunteer for the local greyhound sanctuary, she’s happy with her peaceful life.
Local surfer Nate Bryson plans to leave Conwenna and see the world. He wants to shake off his reputation as a ladies man and start again somewhere new. Before departing, Nate decides to raise funds for the dog rescue home as a way of giving back to the community.
When Nate approaches Zoe to help with the charity event she sees there’s more to him than meets the eye. Nate can’t believe he’s failed to notice the kind and beautiful woman right before him. But can two such different people ever be together, especially if one of them is determined to leave? When you didn’t think you could love a series even more along comes Nate and Zoe’s story … my heart will forever belong in Conwenna Cove.

Nate Bryson was everyone’s friend in the small coastal village in Cornwall.  Working at his Aunt and Uncle’s café he welcomed neighbours, friends and tourists alike, he brought a smile to all and soon became a confidante and pal to many.  However, Nate was still struggling with heartache from his past and felt like the time was right to spread his wings and travel.  Nate has caught the eye of many ladies in and around the cove with his sunkissed looks, charm and personality but no-one caught his heart until he saw Zoe Russell, the owner of the local diner.  Even though Zoe has been at the diner for a while now their paths had never really crossed but now as Nate is making plans to leave Conwenna Cove for 6 months his heart suddenly notices something that’s been missing in his life … Zoe.  Terrible timing for Nate with his hopes and dreams of travelling now thwarted by an unrecognised beat of his heart and one he’s struggling to get out of his mind.

Zoe Russell is starting to feel established in the cove in the diner and her lovely cottage.  She’s fled from a traumatic ordeal that still plays on her mind and has left her with physical and emotional scars.  She vows to never trust another man but when Nate comes calling looking for help with a local charity, a charity that is very dear to her, she sees more to the instant beauty that is Nate Bryson and she fears that her heart is letting it’s guard down.

When Zoe’s past traumas are still playing on her mind she takes the first steps to healing her heart but she hasn’t envisaged a visitor from the past clouding her judgement.

Nate is struggling with this very new emotion he is feeling.  Life was running almost perfectly but now he’s so confused.

This story had so many wonderful, special endearing moments my heart was literally filled with joy.  The author, Darcie Boleyn, has once again treated us to the beauty of the cove and their love of greyhound dogs, a gorgeous love story and a wonderful warm atmosphere involving the whole community.  My heart will forever belong in Conwenna Cove …

To learn more about Darcie Boleyn and her work please do visit the following pages: