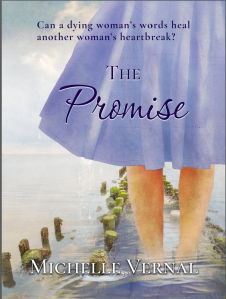 The Promise written and self-published by Michelle Vernal is available NOW in ebook and paperback format. The ebook is also included in the kindleunlimited scheme.

Two women from different generations brought together by another’s wrongdoing.

When British backpacker, Isabel Stark happens across a car accident on a lonely stretch of road in the South Island of New Zealand her life changes forever. The sole passenger, Ginny Havelock asks her to make a promise before she passes away—to find Constance and to say she’s sorry.
Isabel’s a lost soul who’s been drifting through life unsure of where she fits, and the promise she made in New Zealand haunts her upon her return to the United Kingdom. Her only clue as to finding Constance lies within a conversation held at Ginny’s funeral. It takes her to the Isle of Wight.
In the 1940’s sixteen-year-old Constance’s life on her island is sheltered until the death of her brother; Ted brings the reality of war crashing down around her. He leaves behind his pregnant young widow Ginny. When Constance meets a handsome Canadian Airforce man, she’s eager to escape her grief and be swept up by first love. It’s a love which has ramifications she could never envisage.
When Isabel and Constance’s paths finally cross will Ginny’s last words be enough for Constance to make peace with her past? And in fulfilling her promise will Isabel find a place she can call home?

I am so pleased to be involved in the blogtour celebrating and promoting the launch of Michelle Vernal’s latest novel: The Promise.

The Promise is the author’s sixth novel and is another of her time-slip historical romances.  Michelle Vernal writes in both the historical time-slip romance genre and also the romantic comedy genre and her writing smoothly moves from one genre to the other producing enjoyable, relatable reads.

A chance encounter witnessing the after effects of a crash on a country road in New Zealand starts a surprising adventure for British backpacker Isabel Stark.

Heartbroken Isabel decided to take a gap year to New Zealand and give her heart a chance to heal.  Towards the end of her year Isabel is the first bystander to a car accident and offers comfort to the old lady trapped in the car.  Sadly Isabel was to be the last person to see the old lady alive and these last few minutes of comfort that a stranger gave to dear old Ginny was enough for her to pass on a very heartfelt message.  A message that had been laying heavily on Ginny’s mind for seventy years.  Feeling shaken by the emotion of the sadness of Ginny’s death Isabel attended her funeral and was to learn that Ginny was born in the UK and lived on the Isle of Wight just a short ferry ride from her hometown.  Isabel felt like fate had played a hand at putting her in the right place for dear old Ginny.

With Isabel’s gap year coming to an end she returned home with Ginny’s last thoughts and wishes on her mind.  With only a few clues as to Ginny’s last known UK residence Isabel sets off on a journey of discovery.  This journey would take her on an emotive tale travelling back to WWII and to a love story that life so cruelly snatched away.  The journey would also be a time for self-discovery for Isabel herself for her own personal and professional enlightenment.

I was captivated by this time-slip historical romance from Michelle Vernal.  Reading about the tragic love story in WWII was so touching.  I also loved the journey of self-discovery for Isabel, she was learning so much about herself that she had either kept hidden or hadn’t realised her true potential.  A lovely story filled with emotion but interlaced lovingly with warmth and charm with a whole host of great sub-characters.  I didn’t want the story to end as I wanted to know how the characters were progressing with the next instalments in their lives. 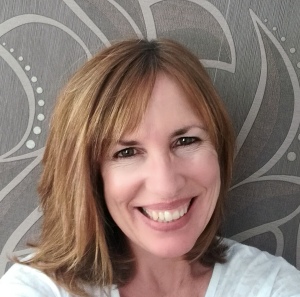 Michelle Vernal is a Harper Collins author who loves a happy ending. She lives with her husband, their two boys and a needy three-legged black cat in Christchurch, New Zealand. She’s partial to a glass of wine, loves a cheese scone and has recently taken up yoga—a sight to behold indeed. She is a freelance writer for a Canterbury lifestyle magazine who is currently working on her seventh novel. Michelle’s a firm believer in happy endings, and all of her stories are written with humour and warmth.

2 thoughts on “The Promise by Michelle Vernal blogtour book review”