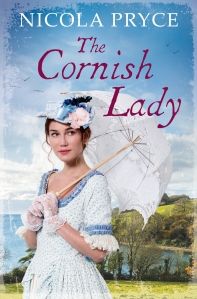 Cornwall:1796
Educated, beautiful and the daughter of a prosperous merchant, Angelica Lilly has been invited to spend the summer in high society. Her father’s wealth is opening doors, and attracting marriage proposals, but Angelica still feels like an imposter among the aristocrats of Cornwall.
When her brother returns home, ill and under the influence of a dangerous man, Angelica’s loyalties are tested to the limit. Her one hope lies with coachman Henry Trevelyan, a softly spoken, educated man with kind eyes. But when Henry seemingly betrays Angelica, she has no one to turn to. Who is Henry, and what does he want? And can Angelica save her brother from a terrible plot that threatens to ruin her entire family?

I am so pleased to be involved in the blogtour celebrating and promoting the launch of Nicola Pryce’s latest novel: The Cornish Lady.

Angelica Lilly is the daughter of a wealthy merchant and is keen to fulfil her late mother’s wishes to marry a Lord.  But one hot summer whilst visiting family friends her life is about to take a dramatic and enlightening journey.  When Angelica’s brother, Edgar, turns up looking dishevelled, distracted and acting rather bizarrely Angelica is starting to fear for his health and his new friendship with Lord Jacob Boswell.  Does Jacob Boswell have an unhealthy control over her brother?  A race to help her brother brings forth danger and drama, unearthing secrets involving embezzlement and exploitation.

I have to admit it did take me a little while to get into the story and characters but my goodness once the author changed gear in the storyline I felt myself engulfed by the drama and felt invested in the characters lives and was eager to learn what happened next.

The Cornish Lady was filled with drama, intrigue, mystery with a charming romance at the heart of the story.  I’m now keen to learn more about the other books in the Cornish Saga series.

Nicola Pryce came to writing after a career in nursing. She has an Open University degree in Humanities and is a qualified adult literacy support volunteer. She is lives in the Blackdown Hills in Somerset and when she isn’t writing she’s probably gardening or scrubbing the decks. She and her husband love sailing and for the last twenty years they have sailed in and out of the romantic harbours of the south coast of Cornwall in search of adventure: it is there where she sets her books.

The Cornish Lady is her fourth book: The others are Pengelly’s Daughter, The Captain’s Girl, and The Cornish Dressmaker.

Nicola is a member of the Romantic Novelists’ Association and The Historical Writers Association. 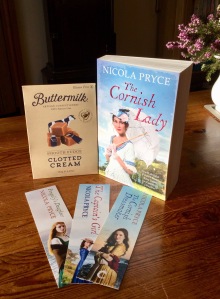 Giveaway to Win a signed copy of The Cornish Lady, a box of Cornish Fudge and some bookmarks (Open Internationally)
*Terms and Conditions –Worldwide entries welcome. Please enter using the Rafflecopter box below. The winner will be selected at random via Rafflecopter from all valid entries and will be notified by Twitter and/or email. If no response is received within 7 days then Rachel’s Random Resources reserves the right to select an alternative winner. Open to all entrants aged 18 or over. Any personal data given as part of the competition entry is used for this purpose only and will not be shared with third parties, with the exception of the winners’ information. This will passed to the giveaway organiser and used only for fulfilment of the prize, after which time Rachel’s Random Resources will delete the data. I am not responsible for despatch or delivery of the prize.