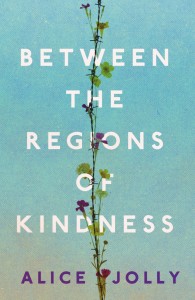 Between the Regions of Kindness written by Alice Jolly, publisher Unbound, is available NOW in ebook and paperback format.

Coventry, 1941. The morning after one of the worst nights of the Blitz. Twenty-two-year-old Rose enters the remains of a bombed house to find her best friend dead. Shocked and confused, she makes a split-second decision that will reverberate for generations to come. More than fifty years later, in modern-day Brighton, Rose’s granddaughter Lara waits for the return of her eighteen-year-old son Jay. Reckless and idealistic, he has gone to Iraq to stand on a conflict line as an unarmed witness to peace. Lara holds her parents, Mollie and Rufus, partly responsible for Jay’s departure. But in her attempts to explain their thwarted passions, she finds all her assumptions about her own life are called into question. Then into this damaged family come two strangers – Oliver, a former faith healer, and Jemmy, a young woman devastated by the loss of a baby. Together they help to establish a partial peace – but at what cost? 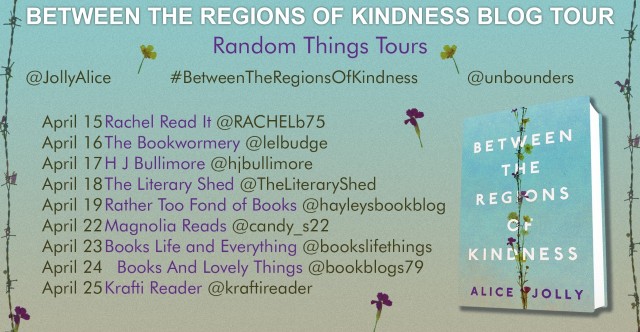 I am so pleased to be involved in the blogtour celebrating and promoting the launch of Alice Jolly’s latest novel: Between the Regions of Kindness.  I have the pleasure of sharing an excerpt:

The dawn must come – that’s all that Rose can be certain of now. Fumbling up the steps, pulling Mollie behind her, she sees its band of grey staining the blackness above a jagged line of roofs. She puts a hand against a wall to balance herself, heads for where the gates must be, stops when she gets there, steadies herself once more against their blistered metal. For a moment, the silence is absolute – the streets, the city, breathe out knowing that the night is ending. Rose gulps a deep breath but ash furs her throat, and she gasps, coughs, feels the sting of smoke in her eyes. She puts Mollie down and the child wobbles, clings to Rose’s leg, starts to howl. Rose bends down and buttons Mollie’s coat, then shakes her to keep her quiet.

The street is white with a frost of broken glass. Rose steps forward into the muffled light, her hand gripped around Mollie’s arm. Phantoms start to stumble from the shadows, caked in plaster dust, clinging to one another as though blind. An elderly man comes towards Rose, staggering over broken kerbstones. He has a colander on his head and his bare legs stick out from under his dressing gown. His knotted hands grip the colander and he sings – Nearer and nearer draws the time, the time that shall surely be, when the earth shall be filled with the glory of God as the waters cover the sea.

A water main has burst and damp seeps through the soles of Rose’s shoes. She reaches down and picks Mollie up, steps out of the spreading puddles. Ahead of her, through the smoke and drizzle, a fire engine is slanted against the jagged outline of a blackened wall. Above, tangled wires dangle from a drunken telegraph post. The sound of bombs still smashes through Rose’s head, pounds in her chest, and at every imagined blast the street buckles under her feet. Voices ricochet around her. God be praised. Where? Where? No All Clear this morning. Wires blown right out the ground.

People gather around a man standing by the gutter, filling a kettle from a drain and pouring water into glass bottles and mugs. The trouble with the shrapnel is that it does jam the lawn mower. Rose’s teeth chatter against the edge of a tin cup. The water is clouded and tastes of ash and soap but she gulps half of it down, then bends to hold the cup for Mollie. All the stories are at an end. So what now? Where can we go? The questions form in her mind but she considers them without concern. The mystery is that she and Mollie are alive. Of course, the house has gone, she knows that. It was the Bostocks’ house and she’d been staying in the sitting room. At least the Bostocks had left the city and Arthur was out at Division B First Aid. But she’d left her gas mask there, her ration book, her last ten-shilling note. And Frank will, would have…

She turns to a woman standing close by. Shackleton Street? Is this the end of Shackleton Street? Where’s the pub? The woman turns, her eyes vacant. She wears red wool socks and pieces of cardboard are tied under the soles of her shoes. Her head shakes, she turns away.

The end of Shackleton Street? The colander man catches hold of Rose and pulls her around, as though he wants to dance. Rose keeps Mollie gripped tightly against her. The end of the road? It certainly is. Except the end ain’t even here, is it? The bloody end and not even any end. A mountainous woman appears, upholstered into a tweed coat. Taking hold of the colander man, she pushes him away. As the man steps back, his dressing gown falls open, revealing long underpants, a furrow of purple ribs. He pulls the dressing gown back around himself, bursts into tears.

The woman steers Rose and Mollie away. Rose recognises her as Mrs Bartholomew, the butcher’s wife, the woman who sold her a steak as green as grass and called her Mrs Von Mayeford. But now Mrs Bartholomew’s grip is steady on Rose’s arm. You need to get to the Rest Centre, love. At Barkers Butts school. Can you hear me, love? The Rest Centre.

I need to get to the end.

The morning is arriving now, listless and blank. From an upstairs window an elderly woman shouts at the sky, grips a singed cat. Seen the worst in November. Wasn’t it enough? On and on, not a bleeding brick standing. Outlined against the bruised sky, a school hat, a pair of field glasses and several pairs of smalls dangle from the blackened branches of a tree. A wooden mangle is hooked over a lamp post and a parachute bomb, like a vast iron coffin, is suspended between the gable ends of two houses. Small boys stand under it, leaping and throwing stones, until a warden drives them away.

Alice Jolly is a novelist and playwright. Her memoir Dead Babies and Seaside Towns won the PEN Ackerley Prize 2016. She also won the V. S. Pritchett Memorial Prize awarded by the Royal Society of Literature in 2014 for one of her short stories, `Ray the Rottweiler’. She has published three novels previously, What the Eye Doesn’t See, If Only You Knew and Mary Ann Sate, Imbecile. She has also written for the Guardian, Mail on Sunday and the Independent, and broadcast for Radio 4. She lives in Stroud, Gloucestershire.