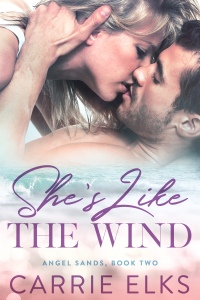 She’s Like The Wind written and self-published by Carrie Elks is available NOW in ebook format.  The ebook is also included in the kindleunlimited scheme.

He’d be a fool to fall for his long-legged, barefoot employee. But bad decisions have never stopped him before…

Successful businessman and single father, Nate Crawford, doesn’t need any more complications. That’s why he’s moved his business – and his life – to a small beach town. He’s expecting sun, sea and tranquility, but what he gets is a whirlwind in the form of town sweetheart, Ally Sutton.

Ally’s used to dealing with heartache. But losing the café she’s owned for years is the final straw. Being offered a new job feels like a lifeline – that is until she meets her much-older, and impossibly handsome new boss.

In the space of a few weeks everything changes. And when an accident forces them closer, Nate and Ally can’t ignore the fascination between them any longer. But are they ready for the storm their relationship is about to unleash?

**She’s Like the Wind is the second book in the Angel Sands series, set in a small beach town on the California coast. If you like a heartwarming read that’s low on angst and big on feels, this stand-alone romance is for you.** 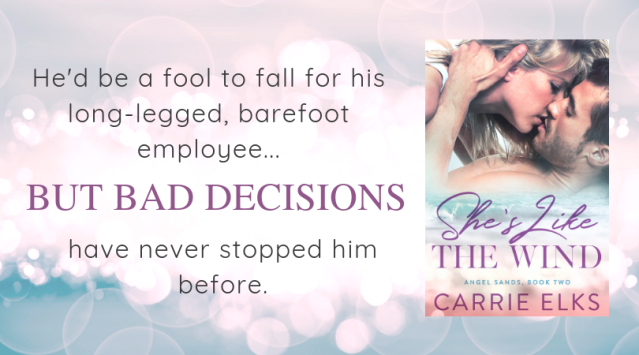 Firstly, I’d like to wish Carrie Elks a Happy Publication Day for She’s Like The Wind and thank her for an arc copy of her novel.

Carrie Elks certainly knows how to write heart-stopping, delicious romances and with Book Two in the Angel Sands series: She’s Like The Wind, the author teases our heart with a romance that awakens the hearts desire to feelings the recipients struggle to accept that they are worthy of.

Ally Sutton has lived in Angel Sands all her life and has been running her father’s beachside café for many years but when she learns he’s sold the café from underneath her she feels very hurt and betrayed.

Nate Crawford is hoping his move to Angel Sands will be a new start for him and his teenage daughter Riley with the purchase of the café which included the proviso of keeping Ally Sutton in employment.  Riley is struggling emotionally with the new start and with the struggles of coping with the recent bereavement of her mother.  Her life has changed so much in the last few months and she’s very angry with her father for dragging her miles away to a different state.  Nate’s love life has also suffered when his responsibilities are questioned.

Renovating and rebranding the café is Nate’s new project and he’s very keen for his brand to transfer successfully to this coastal location.  Nate was eager to train his new staff himself but his first introduction to Ally Sutton, the manager of the former café, is met with distain.  Although Nate and Ally’s first impressions were guarded a truce is met and friendship soon blossoms.

When unexpected events bring Nate and Ally closer their friendship soon develops into a desire that is too hard to resist but will the pair be able to let their hearts be free to love again?

This is a story of new beginnings for many, it’s also a story of the relationships between a father and a daughter coping after tragedy.

She’s Like The Wind is another fabulous story from Carrie Elks with a romance that sizzles.

Looking at her was like looking into the sun.  He was almost certain he was going to get burned.

Carrie Elks writes contemporary romance with a sizzling edge. Her first book, Fix You, has been translated into eight languages and made a surprise appearance on Big Brother in Brazil. Luckily for her, it wasn’t voted out. Carrie lives with her husband, two lovely children and a larger-than-life black pug called Plato. When she isn’t writing or reading, she can be found baking, drinking an occasional (!) glass of wine, or chatting on social media.