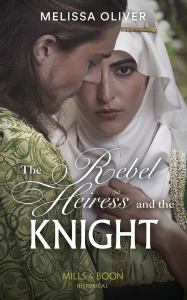 The Rebel Heiress and the Knight written by Melissa Oliver, publisher Mills & Boon Historical, is available NOW in ebook and paperback format.

Book Blurb
She must marry the knight

By order of the king!

Widow Eleanor of Tallany Castle knows her people are broken by the taxes demanded by King John. So when she’s ordered to marry Hugh de Villiers, a knight loyal to the king, she’s furious—even if he is handsome! As gallant Hugh begins to heal the scars of Eleanor’s abusive first marriage, she’s even more determined to keep her secret: she is the outlaw the king wants to send to the gallows!

I voluntarily reviewed an arc of this book. All opinions are my own and no content may be copied. However, authors and publishers may use elements of my reviews for quotes

I am so pleased to be involved in the blogtour celebrating and promoting the launch of Melissa Oliver’s debut novel … what an accomplished debut it is as well.  I’ve read quite a few historical romances from Mills and Boon and I would say this new author’s storytelling is as good as her M & B colleagues.

I haven’t read many stories set in the 1200’s, I’m more a regency romance fan, but I soon found myself transported to this time.  A time when knights took an oath with their King and proclaimed an allegiance with him; to serve, to protect and to honour all obligations.  So when King John instructs his noble knight Hugh de Villiers to marry widow Lady Eleanor he is a little disappointed with this latest missive from the King.  See Hugh de Villiers enjoys being a solider and marriage was not on his agenda after his heart was broken years ago.

Lady Eleanor is also shocked with this new order from the King; after a disastrous marriage with her evil late husband Eleanor is still suffering emotionally and physically and she too had vowed not to open up her heart again.  However, they both must obey the King.

Hugh also has another missive and that is to catch the outlaws that are robbing the silver that’s been gleaned from the villagers of Tallany in respect of the King’s taxes.  Eleanor is very loyal to her villagers and condemns the taxations by the King and she puts plans in place to help out those in need.

The union between Eleanor and Hugh gets off to a rocky start; Eleanor has a secret and the closer she becomes with her new husband the more her life and her secret is put at risk.

A dangerous dalliance with emotions and desires but also a story staying true to your beliefs and what is deemed most honourable and correct despite what the hierarchy have sanctioned.

I found this novel by Melissa Oliver to be thrilling, dramatic, full of mystery and espionage but it was also charged with heat and longing. Lady Eleanor has found her knight but he’s also picked up more than he bargained for!

Growing up in Richmond- Upon-Thames, Melissa Oliver used to walk past the old Mills and Boon offices as a teen, and wistfully sigh that one day her dream of writing for them will come true. Amazingly, after all these years, it finally has…& now she can bring all those stories out onto the pages of her books. Melissa lives in south-west London with her gorgeous husband and equally gorgeous daughters, who share her passion for castles, palaces and all things historical.