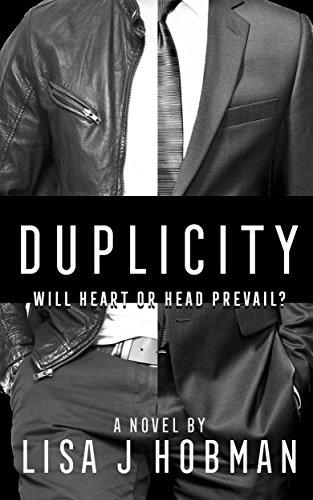 Duplicity written and self-published by Lisa J Hobman is available NOW in ebook and paperback format.

Fin Hunter has spent his life striving for his father’s elusive love and approval by following a life path set out for him and not of his own choosing. However, when he is yet again blamed for something out of his control, he snaps. Deciding to stand on his own two feet, he chooses to follow his true passion – music. But will he find real happiness?

Star Mendoza is living her dream in Edinburgh, a place she discovered in British novels while growing up in a small USA town. Now working in a city coffee shop, the tattooed, pink-haired young woman fantasises about the handsome businessman she serves daily. He’s totally out of her league but a girl can dream. Suddenly he stops calling in only to show up again in the most unlikely of places. Could her fantasy now become a reality? Or is the attraction of opposites doomed to fail?

I adored this story from Lisa J Hobman, her ninth contemporary romance novel.  Lisa’s words have a way of drawing you into the location of the storyline and the characters, I felt that I was there living the hopes and dreams and riding the waves of the emotions with the characters.  I also feel that Lisa is a great advocate for Scotland and its raw, natural beauty.  This particular story takes us to Edinburgh where we follow two particular people very different from each other who find a magnetic pull between them that keeps drawing them together.

Fin Hunter is a shy man who from a young age has tried to gain his parent’s love and attention and to please them.  Fin’s parents have had a great deal of guidance shall we say in his life, they persuaded him to take up law and work for the family firm and lined up a very suitable young lady for a wife for him.  The story starts when Fin is due to marry this suitable young lady.  Fin was petrified his life was running out of control, he was confused to how he truly felt about Elise, his bride to be.  When events don’t go to plan Fin starts to realise that maybe this is the jolt he needed to step back from his parents stronghold and stand on his own two feet and learn to experience life’s greatest adventure of finding true love.  With his professional and personal life in turmoil Fin finds solace with his friends at the local club, which so happens to be karaoke night.  Fin has always loved music, especially rock, through the bravado of alcohol Fin takes to the stage and literally rocks the place.  This shy, unassuming man turns into a rock god with a voice oozing sex appeal.  The audience love him and he catches the eye of a certain pink haired young woman.

Star Mendoza moved from America to live her dream of working and living in the city she read about in her favourite novels, Edinburgh.  Star is a very likeable young woman who loves to be individual with her style, which at present she is rocking a striking pink and blonde hair do.  Star loves working in the coffee shop especially when a shy, suited young man pops in for his daily caffeine fix.  Star is disappointed when she learns something about this young man and when he disappears for a while she is left forlorn.  However, seeing him at the club in a totally different light mesmerises her.  Like polar opposites the pair are attracted to each other.  However, Fin has a lot of personal heartache to deal with and is so confused with which way to turn and who to trust anymore.

Can this unlikely pair help each other overcome obstacles and help them learn to trust and find the true meaning of love?

This story was gloriously addictive.  I fell for Fin, the pressure he was under, his whole life was just so tragic, a childhood and now adulthood of lost opportunities.  When his double persona was unleashed it was exciting and quite captivating to watch him unfurl.  The chemistry between Fin and Star was felt in abundance and my heart broke for each hurdle they had to face.  A stunning, emotive story 5/5*

To find out more about Lisa J Hobman please do visit the following pages:

Reasons to Leave (Reasons 1) and Reasons to Stay (Reasons 2) by Lisa J Hobman are available now to download. 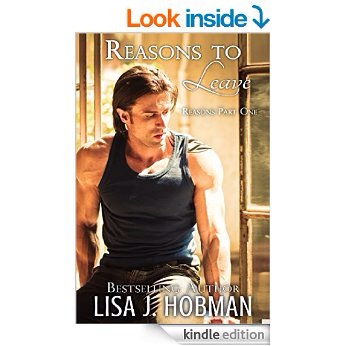 Product details (as seen on amazon page)
The daughter of a single mother, and abandoned by her father, Stevie thought she had finally found a man she could trust.

Aged eighteen she thought she would be with Jason forever.
Everything between them was perfect until the night of the leaver’s ball when he disappeared without trace.

Ten years on, can Stevie ever learn to trust again enough to give her heart?
Or are the ghosts of her past determined to stop her from ever finding true love? 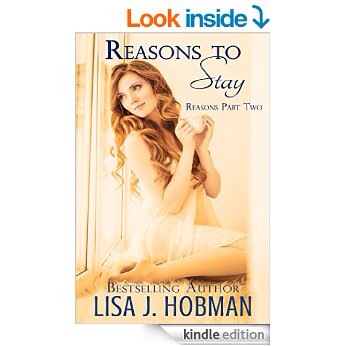 Product details (as seen on amazon page)
Just when she has learned to trust again Stevie’s life is once more thrust into uncertainty. Left with only the memories of her deeply passionate relationship she tries to piece together what is left of her heart.

Shocking news leaves her reeling once again as she tries to help her first love Jason’s brother, Dillon, to rebuild his life.

Will Stevie’s heart ever be mended? And if so who will be the man worthy of her trust? And will she ever get her happy ever after?

I would like to thank the publishers for a beta copy of these two ebooks in return for an honest review.

I loved how this mini series was split into two novels separating an important part in Stevie and Jason’s journey. Book 1 – Reasons to Stay saw you introduced to Stevie and Jason who were childhood sweethearts and had their whole lives planned out together. However, Stevie’s heart was shattered when Jason suddenly disappeared out of her and his family’s lives. Life carried on for Stevie but her heart remained cracked after this. 10 years later and an unexpected trip to Scotland with her job sees her bumping into Jason. What follows are heart wrenching moments from the pair as flames are ignited amongst feelings of anger and despair. Why did Jason leave? Can they carry on from were they left? Lisa J Hobman definitely takes you on an emotional rollercoaster with this first novel and leaves you gasping for more.

Book 2 carries on with the emotional journey for Stevie and Jason. We learn more about Jason’s reason for leaving and further discoveries from the past are revealed which will alter and question the feelings they have for all concerned.

After completing book 1 and book 2 in the series I can honestly say my emotions have been in turmoil. I felt every high and every low with Stevie and Jason. The author, Lisa J Hobman, knows how to engage her audience. The characters involved in the storyline are written with warmth, humour, compassion, there is angst, turmoil and tragedy. There were heated times of lust and longing and wonderful romantic times of love to melt anyone’s heart. As always Lisa takes you on a journey and shares her love for her beloved Scotland. My heart can now return to a steady beat after this overwhelming, emotional read. A heartwrenching, beautiful 5/5* read for both ebooks in the Reasons mini series.

Whilst I was reading these ebooks a certain phrase Lisa used really touched me which I’d like to share with you:

‘But I think it’s what we do once we realise we’ve made mistakes that counts.’

To find out more from Lisa J Hobman visit: 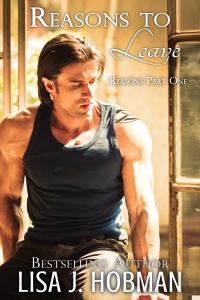 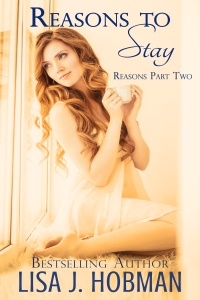 Reasons to Leave: Reasons part one (due out in January 2015)

Reasons to Stay: Reasons part two (due out in February 2015)

I am pleased to show you a sneaky peak of a great new book mini series by Lisa J Hobman.

The synopsis for Reasons to Leave:

The daughter of a single mother, and abandoned by her father, Stevie thought she had finally found a man she could trust.
Aged eighteen she thought she would be with Jason forever.
Everything between them was perfect until the night of the leaver’s ball when he disappeared without trace.Ten years on, can Stevie ever learn to trust again enough to give her heart?
Or are the ghosts of her past determined to stop her from ever finding true love?

The synopsis for Reasons to Stay:

Just when she has learned to trust again Stevie’s life is once more thrust into uncertainty. Left with only the memories of her deeply passionate relationship she tries to piece together what is left of her heart. Shocking news leaves her reeling once again as she tries to help her first love Jason’s brother, Dillon, to rebuild his life. Will Stevie’s heart ever be mended? And if so who will be the man worthy of her trust? And will she ever get her happy ever after?

Lisa J Hobman is a fairly new author, her debut novel, Bridge over the Atlantic, published in 2013 was shortlisted in the Romantic Novelists Association’s Romance Novel of the Year 2014 (The RoNAs) – Contemporary Romance Category. Lisa has published a further 4 novels in just 18 months since her debut. Her books are described as contemporary romance and are suitable for 17+ due to mature content. Lisa is a very sociable author with her readers and you can connect with her via the following links:

I’m looking forward to reading The Reasons series, it will be available to pre-order soon.

So excited for the lovely author Lisa J Hobman, her Christmas novella, Christmas Presence is now available to pre-order on amazon. The novella is due to be released on 6th November 2014. 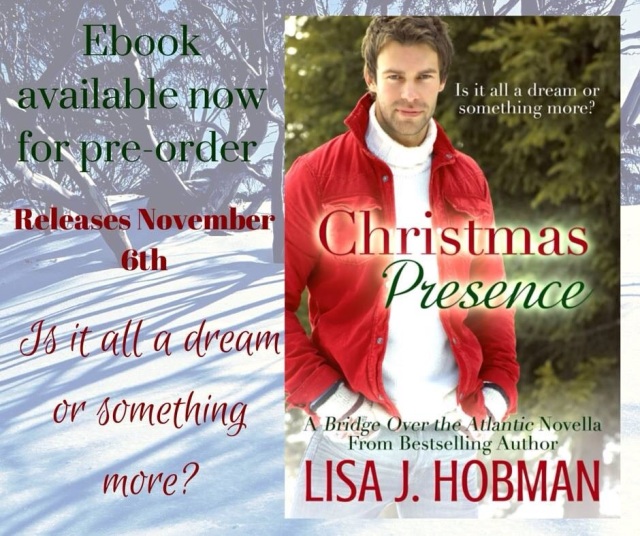 Blurb: Mallory got her happily ever after, but haunting loss in the past has her running scared that she will lose her beloved yet again. Can anything…or anyone make her realise she needs to let go of the past and live for today?

I’m looking forward to this novella, I loved Mallory’s story from Bridge over the Atlantic and the companion book Bridge of Hope. When I got to the end of both of these books I felt sad that I’d finished reading about Mallory, she had become like a friend to me so this novella is much needed fuel for my craving to know what follows for Mallory and Greg. I feel that the best thing an author can do is make you fall in love with the book characters and Lisa did just this in the above two novels.