Saving the World written by Paola Diana, publisher Quartet Books, is available from 2nd May 2018 in paperback format.

A passionate call for international gender equality by a leading entrepreneur; this smart, accessible and inspiring book makes the case for why all nations need more women at the top of politics and economics. `The status of women is a global challenge; it touches every human being without exception. How is it possible that countries where women have achieved political, economic and social rights after exhausting struggles remain seemingly indifferent to the egregiousness of other nations where the status of women is still tragic? The time has come to help those left behind.’ 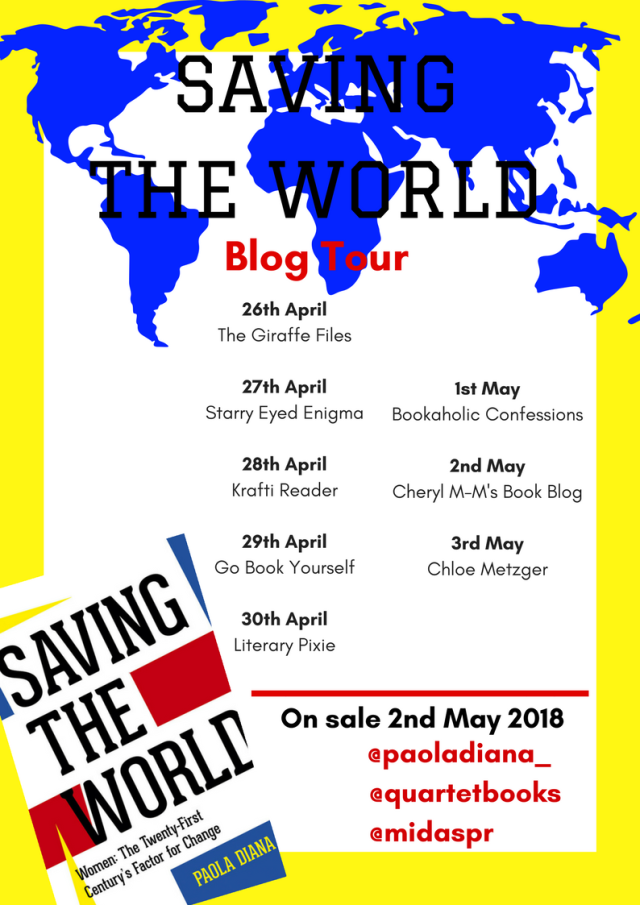 I am so pleased to be involved in the blogtour celebrating and promoting the launch of Saving the World by Paola Diana.

Paola Diana has kindly offered a great excerpt to share on my blog today:

Saving the World by Paola Diana
History of the female condition: a history in half

Until recently, nobody ever, to my knowledge, wrote history books presenting the past from a female point of view. As an academic subject, history has always been the preserve of men, who over the centuries have told the past in their own way. There have been remarkable women – queens like Elizabeth I, for example, who brought prosperity and stability to their nations – but on the whole the history of mankind is full of wars and acts of violence perpetrated by male rulers.

Imagine if, from the Middle Ages to the present day, half the nations in Europe and Asia had been led by strong and emancipated women; never oppressed by cultural and religious dictates, able to express their natural wisdom and humanity. Would there have been the same wars? The same slavery? Would millions of people have been exterminated? Obviously, these women would not have limited power to themselves: they would have appointed other women to senior positions in all fields, from law to art.

90 per cent of the world’s ambassadors are men. Yet it is generally agreed that the female gender is more skilful at diplomacy than the male. And it goes without saying that a woman who gives life does not knowingly carry a child only to see it die in war a few years later. This is not her mission in the world! History would have been very different if women had from the outset been given the opportunity to leave an imprint on international politics. In the words of Zainab Salbi, founder of Women for Women International, ‘War has a male perspective. However, during a war we continue to live: eating, sleeping, going to school, working. And it is women who guarantee all this. The female perspective is the only one looking at peace.’

The English philosopher and economist John Stuart Mill describes very well the status of women throughout the centuries. At the end of the nineteenth century, Mill demanded to know how it was possible to establish from birth that women could not be employed in jobs that were legally open to stupid and cowardly members of the opposite sex.

This enlightened man, unsurprisingly married to feminist Harriet Taylor, explained how the millennial injustice suffered by women, like forms of discrimination based on religion or ethnicity, damages the cultural and economic development of a society, impoverishing the whole of humanity in the process.

If we think about women of the past, compelled to be subservient, fist to the father and then to the husband, deprived of the right to study, work and vote, we see a vitiated society, where the privileges of the male caste are maintained through a social and political system that justifies all sorts of abuses. History does not necessarily repeat itself. Humanity needs to evolve and, for this to happen, it is necessary for women to stop being considered daughters of a lesser god.

To learn more about the author please visit the following pages: