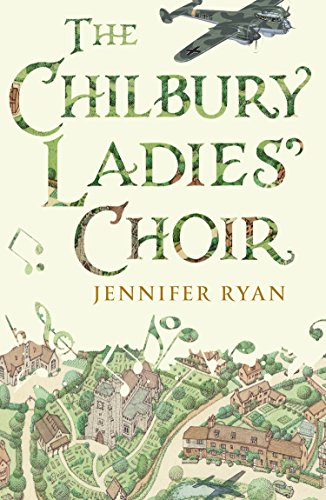 The village of Chilbury in Kent is about to ring in some changes.
This is a delightful novel of wartime gumption and village spirit that will make your heart sing out.

In the idyllic village of Chilbury change is afoot. Hearts are breaking as sons and husbands leave to fight, and when the Vicar decides to close the choir until the men return, all seems lost.

But coming together in song is just what the women of Chilbury need in these dark hours, and they are ready to sing. With a little fighting spirit and the arrival of a new musical resident, the charismatic Miss Primrose Trent, the choir is reborn.

Some see the choir as a chance to forget their troubles, others the chance to shine. Though for one villager, the choir is the perfect cover to destroy Chilbury’s new-found harmony.

Uplifting and profoundly moving, THE CHILBURY LADIES’ CHOIR explores how a village can endure the onslaught of war, how monumental history affects small lives and how survival is as much about friendship as it is about courage.

I have just finished reading this delightful, uplifting, inspiring, heart warming novel and I’m flabbergasted that The Chilbury Ladies’ Choir is Jennifer Ryan’s first novel.  The words written by Jennifer Ryan were so profound I could visualise the scenes and characters in my head played out on a big screen and I’m hoping one day we will get the chance to see this wonderful story on our TV screens.

This story is set in 1940 in a quiet, sleepy village in Kent that up-to-yet hasn’t seen much devastation with the war.  Most of the men in the village have joined up with the war help so the village is pretty much left with just the women to hold the fort.  The Vicar has declared that the choir is to close due to all the male voices currently indisposed.  The ladies of the choir are not pleased and feel lost without the choir.  The ladies between themselves and with the help of Prim, a music tutor who has just moved to the village, decide to keep the choir up and running.  The Chilbury Ladies’ Choir is born and sets to keep spirits up during this unsettling time.  The joy of singing together in a choir brings the ladies of the village together and the worries of those missing loved ones are shared.  The choir becomes a formidable force and gain strength within themselves and their voices become clearer and sweeter.

Diary keeping was encouraged in these tough times to write down their thoughts, their daily routines and rituals, their hope for the future.  I loved how the author, Jennifer Ryan, split each chapter up with these journal entries from different characters in the story.  We see the story set out from different perspectives.  From women and girls of all ages seeing the war with different eyes.  One young woman in particular in the village was using the war and the choir to cover for the most immoral agreement between one of the village’s high ranked and obnoxious men and herself.  Greed was in the forefront between these two unscrupulous people.

Disaster was to strike shattering the very soul of the village but the ladies of the choir came together offering respite for themselves and also giving hope and encouragement to others.

This story was just so lovely.  It wasn’t all hearts and flowers though.  Jennifer Ryan opened our eyes to the world as it was in a very upsetting time.  Lives and livelihoods were lost but life had to go on and the women all over the country found an inner strength to keep everything going.  From the devastation of loss we could feel light and warmth with love finding its way through.  A truly, wonderful debut novel that I simply adored.  5/5*

To find out more about Jennifer Ryan please do visit the following pages:

I voluntarily reviewed an arc of this novel.  All opinions are my own and no content may be copied. However, authors and publishers may use elements of my reviews for quotes.

The Bennet sisters have been summoned from New York City.

Liz and Jane are good daughters. They’ve come home to suburban Cincinnati to get their mother to stop feeding their father steak as he recovers from heart surgery, to tidy up the crumbling Tudor-style family home, and to wrench their three sisters from their various states of arrested development.

Once they are under the same roof, old patterns return fast. Soon enough they are being berated for their single status, their only respite the early morning runs they escape on together. For two successful women in their late thirties, it really is too much to bear. That is, until the Lucas family’s BBQ throws them in the way of some eligible single men . . .

Chip Bingley is not only a charming doctor, he’s a reality TV star too. But Chip’s friend, haughty neurosurgeon Fitzwilliam Darcy, can barely stomach Cincinnati or its inhabitants. Jane is entranced by Chip; Liz, sceptical of Darcy. As Liz is consumed by her father’s mounting medical bills, her wayward sisters and Cousin Willie trying to stick his tongue down her throat, it isn’t only the local chilli that will leave a bad aftertaste.

But where there are hearts that beat and mothers that push, the mysterious course of love will resolve itself in the most entertaining and unlikely of ways. And from the hand of Curtis Sittenfeld, Pride & Prejudice is catapulted into our modern world singing out with hilarity and truth.

I won a copy of a proof of this novel via social media.  I was first drawn to the book via the gorgeous but quite simple cover.  I was also intrigued by the synopsis of a modern day Pride and Prejudice.

I have to be honest this book was a slow starter for me and it took me a little while to get into the characters and storyline.  That being said, I am glad I persevered as I found I was wanting to know what happened next for the sisters and at the end I quite enjoyed the story.

Mr and Mrs Bennet are the parents of 5 girls aged between 39 and 23, they live in an 8 bedroom Tudor house in Cincinnati.  Mrs Bennet is concerned that the girls’ body clocks are ticking away and wishes to marry the girls off as soon as possible.

Chip Bingley is a handsome ER Dr and recent reality TV star and is very much still eligible.  Mrs Bennet believes Chip would make a very good suitor for either Jane or Liz and has set the ball rolling for an intervention between her girls and Mr Bingley.  Chip’s best friend is a rather arrogant but equally handsome, Fitzwilliam Darcy.  His attitude towards the women residing Cincinnati riles Liz and Darcy has definitely ruffled her feathers.

All is not what it seems in the Bentley household.  Following her father’s recent health scare all the girls have been summoned to help out with his recovery.  During her stay in the family home Liz discovers that their parents are actually broke.  Whilst Liz’s mother is matchmaking and topping up the girls’ ‘bottom drawers’ Liz is on a mission to help her parents out of the debt hole they’ve dug themselves in.

The story has moments of fun and quirkiness at times.  I loved the old fashioned romance idealism that was brought bang up to date.  Liz’s character was the most endearing.  She is an independent woman, working for a successful magazine in New York but thinks nothing of jetting off across the country to help her family when in need.  Liz had a relationship but it was one of convenience, more convenient for the other partner mind you, Liz was missing out on the true details of a loving partnership.  I loved her sparring with Darcy.

I would recommend this book and urge you to give this wonderful, modern version of an old fashioned romance a chance.  However, as it was a slow starter I’ve marked my score down slightly.  3.5/5*

“Plenty of men don’t want children.  Mr Bennetttook a sip of coffee.  I’m still not sure that I do.”

To find out more about Curtis Sittenfeld’s and her books please visit the following links: